Cutting down trees for CPEC by Muhammad Sadaqat

Cutting down trees for CPEC

Trees are coming in the way as the road for the China-Pakistan Economic Corridor (CPEC) starts to snake through the heart of the country. 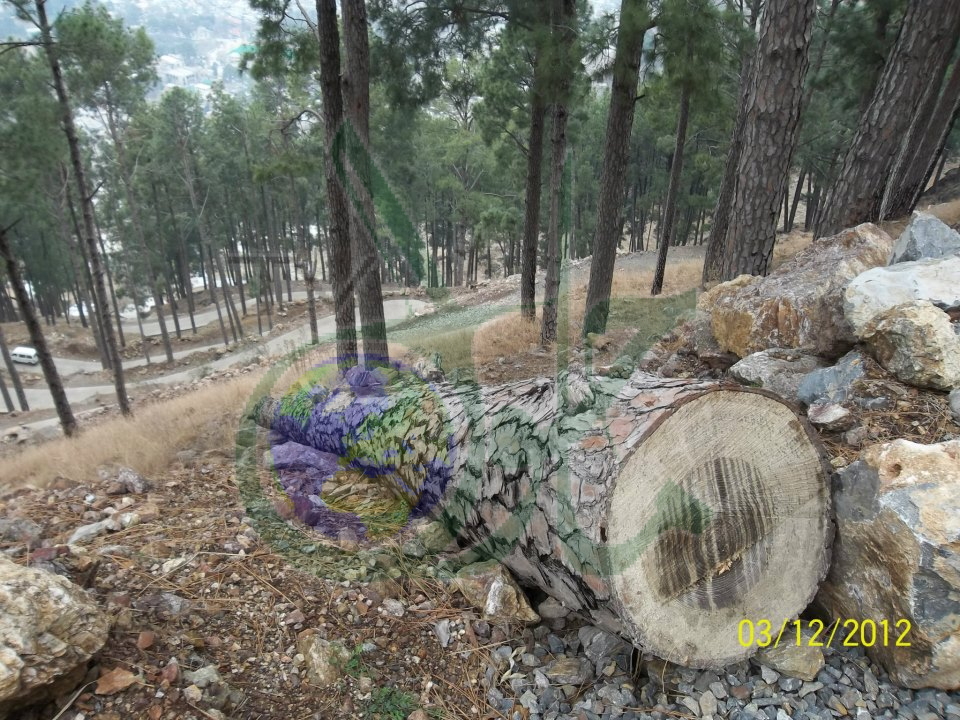 Hazara division of Khyber Pakhtunkhwa, one of the wettest parts of the country with large forested areas home to diverse wildlife, will be deprived of tens of thousands of trees to make way for CPEC, according to officials at the Forest Department.

Conservator forest for Upper Hazara, Zafar Ali Khan, says 13,784 trees measuring 200,000 cubic feet (cft) have already been cut down from the Oghi and Darband forest areas of Mansehra district, along with different areas in Battagram, Kohistan and Torghar districts. The felled species include pine, scrub and some fruit trees.

In Siran forest division of Mansehra, which falls under the remit of conservator forest for Lower Hazara, a total of 10,075 trees measuring 199,040 cft were chopped down in 28 villages along the CPEC route, says District Forest Officer Riaz Khan Tanoli. He adds the species include pine, sufaida (populus ciliate), jangli toot (paper mulberry), draik and some local species, but very few fruit trees. A visit to these places reveals large tracts of stripped land, with construction machinery shrouding the air in a perpetual cloud of dust.

Further south, according to statistics obtained from Gallies Forest Division DFO Sardar Muhammad Salim, over 3,200 mature trees from Shimla Hills, Banda Sinjilya and Thanda Maira village have been chopped off.

As early as February 2015, PAK-EPA denied clearance for the construction of the Raikot-Islamabad Highway which was to form part of the 2,445-kilometre CPEC.
The figure is grossly understated. An EIA report prepared by the National Highway Authority (NHA) in 2015 for the 59.1-kilometre Hasan Abdal to Havelian section of the six-lane E35 highway says the project has deprived the area of over 2,000 fruit trees and 25,500 non-fruit or forest trees.

More deforestation is on the cards. Insiders at the forest department say CPEC will rob the green belts from Haripur to Thakot town in Battagram district of 70,000 matured trees including orchards. This is in stark contrast to the Pakistan Environmental Protection Agency’s (PAK-EPA) observations.

As early as February 2015, PAK-EPA denied clearance for the construction of the Raikot-Islamabad Highway which was to form part of the 2,445-kilometre CPEC. Rejecting the Environment Impact Assessment (EIA) report for the project, the agency described it as unprofessional and lacking in information about the costs to the environment. “The report is confusing. The builders of the highway need to address the matter in a serious manner,” Dr Mohammad Khurshid, director general of the EPA, said in his report.

However, assistant director environment at NHA, Islamabad, Rubina Kosar, insists that while Pak-EPA had earlier refused clearance for the Raikot-Islamabad highway, it had eventually granted formal clearance on October 22, 2015. There is no documentary evidence to verify this.

According to her, an environment impact assessment carried out by a private firm maintained the total loss of fruit and non-fruit trees would be 50,000. When reminded that 25,500 non-fruit and 2,000 fruit trees were felled for the said road in the Hasan Abdal-Havelian section alone, she insisted her figures were correct. Forget about this (the EIA report of the Hasan Abdal-Havelian section), what I am sharing is the correct information.”

During the last three years, 100 million saplings of different species have been planted and another 50 million would be planted by December this year.
“Ninety eight per cent of the trees falling under the area of the CPEC project are on private property. Very few trees from reserved forest areas will be felled for the project,” claims conservator forest Zafar Ali Khan. Though felling trees without permission from the forest department is prohibited under Cutting of Trees (Prohibition) Act, 1975, Khan says they did not object because CPEC is a project of “national importance”. Instead, the forest department has decided to ensure maximum plantation along the motorway’s length. He says it is common practice to plant seven or eight trees as compensation for an uprooted one.

According to standard procedure, explains Saleem, the agency responsible for felling trees (NHA in this case) pays 85 per cent of the standing value of each tree (assessed by the forest department) to the owner of the land.

The other 15 per cent is deducted as salvage charge from the owner, who is entitled to take the tree. “The owner, however, is bound to use the wood from the tree either for construction or making furniture, and cannot sell it on to those who vend wood for fuel.”

Masood Ahmed, a resident of Thanda Maira village in Salhad area, Abbottabad district, says his family has “sacrificed” 15 matured pine trees. Ahmed, who is in his fifties, says that though his family has reservations about the rates of compensation, the payment was made promptly by the NHA. Other villagers like Asif Gul, a village councilor from the same area in his thirties, complains compensation rates for their houses and agricultural lands are way below the market price.

Rights activist and lawyer, Advocate Zafar Iqbal, agrees with the importance of CPEC in uplifting Hazara’s economy, but he says the government could have chosen another route to minimize damage to the environment.

“If remedial measures are not taken, Pakistan will become a major contributor of global warming after completion of this project.”
“Frequent deforestation has already disturbed the natural temperature of Hazara, especially Abbottabad, which was once the choice place for picnickers,” he says. Now, temperatures in Abbottabad can go as high as 42 degrees centigrade in the summer.

Former assistant director of the EPA and incumbent manager environment of a non-governmental organisation in Abbottabad, Sardar Nauman, says air quality and noise levels will deteriorate drastically with increased industrial activity and vehicular traffic in wake of the CPEC. “If remedial measures are not taken, Pakistan will become a major contributor of global warming after completion of this project.”

Nauman says the government should take steps to implement recommendations of the EIA immediately, because waiting for the completion of the CPEC for another couple of years would make the ecological loss irreversible. He also recommends a carbon tax for vehicle owners.

Conservator forest for Lower Hazara, Azhar Ali Khan, says steps for mitigating the loss of trees are already being taken. During the last three years, 100 million saplings of different species have been planted and another 50 million would be planted by December this year, he claims. Azhar Ali also adds that eight tonnes of seeds of different species have been airdropped from helicopters over 8,000 hectares of land in Hazara division alone. He hopes that over the next three years this exercise would increase forest coverage by three percent in Hazara.

Sardar Saleem says his department plans to plant 500,000 plants on both sides of the 39-kilometre stretch of the highway going through Abbottabad district. Zafar Ali Khan promises an even higher figure — 100,000 plants. But both agree this can only be possible after construction is completed. By then, it may already have been too late.